i had an amazing run where i killed everything whit no problem and then i decided to use an item that gives me -1 magic shield and then i get killed... 10/10 would reccomend

Wow! incredible fun to play. At first you think "How simple. Couldnt be easier" then Boom!! Oh god I cant fit that sword! wait! its touching my inventory! oh no my mace! So much fun

You have really stripped down the basic's of why I love rpg's and made it an anxiety inducing nightmare...that I won't stop playing because it's also super fun to play Great job.

What is the campfire music?  It's so chill.

This game takes a hilarious idea, adds great music, math, the urgency and randomness of a rogue-lite, and features of an "idle hero" game together to create an enjoyable experience.  In the future, I'd like to see combat make a little more sense.  Although it's an auto-battler, it seems like an invisible game of "War."  Additionally, it would be nice if the items had a "net power:square" ratio listed on them somewhere.  Thanks so much for making this game!

We just discussed your game on our podcast! Come check us out!

If it's coming to android, it will take all my time :D

I absolutely love this game. One of my favorite parts of a lot of RPG's is inventory management, so this just sings to me. Add a save state and full screen and I'd buy it.

Great fun, played for an hour straight before I died.

Honestly I thought it was too easy, before hitting level 10 and losing two fights in a row.

A couple extra features, maybe an overworld/shop/selling minigame, and very slightly polished graphics, and I'd pay money for it, guaranteed.

This was recommended to me a little while ago and I'm SO glad that I've managed to play it properly now. This is such a cool idea and it's been done SO well!!

(This is the second game on the video)

Absolutely love every aspect of this. Any way we can get a making of video or picture article? I find that kind of stuff fascinating.

I fell in love with this little game right away, even if I was weirded out by the controls at first. Here's a video I made with my thoughts and first reactions to the game. XD

I cannot move my items!! I think it is a bug as i have reinstalled and tried multiple times to restart the game. Please fix

I might be late to the party. But it turns out you need to move items with the WASD. You pick them up with the mouse, move them with your keys. A bit strange, but the challenge kinda works.

Hey guys, played up to 17 and got a little bored, due to the lack of feedback between my power level and the enemies level. (at 67/73/69/72 currently)

I read you nurfed rings to prevent min maxers but I think your missing the algorithm you should be using for item gen.

I think it would be better to generate an item, counts its slot, generate a secret "rarity" of 1-2-3-4-5 then generate a random number between 10%???? +/- of the slot*rarity value, and randomly apply stats to the item (based off the type, for example the gold belts favor attack and magical defence)

I would also offer bonuses for bigger more difficult items because they are harder to slot together in a coherent order in the equipment slots.

Was fun playing, i'll keep going tomorrow see how far it goes, I hope it's not an endless one. I have a need to check every item to make sure i'm not missing stuff!

now you can floor them or ceiling or just round them, whatever you thinks best. 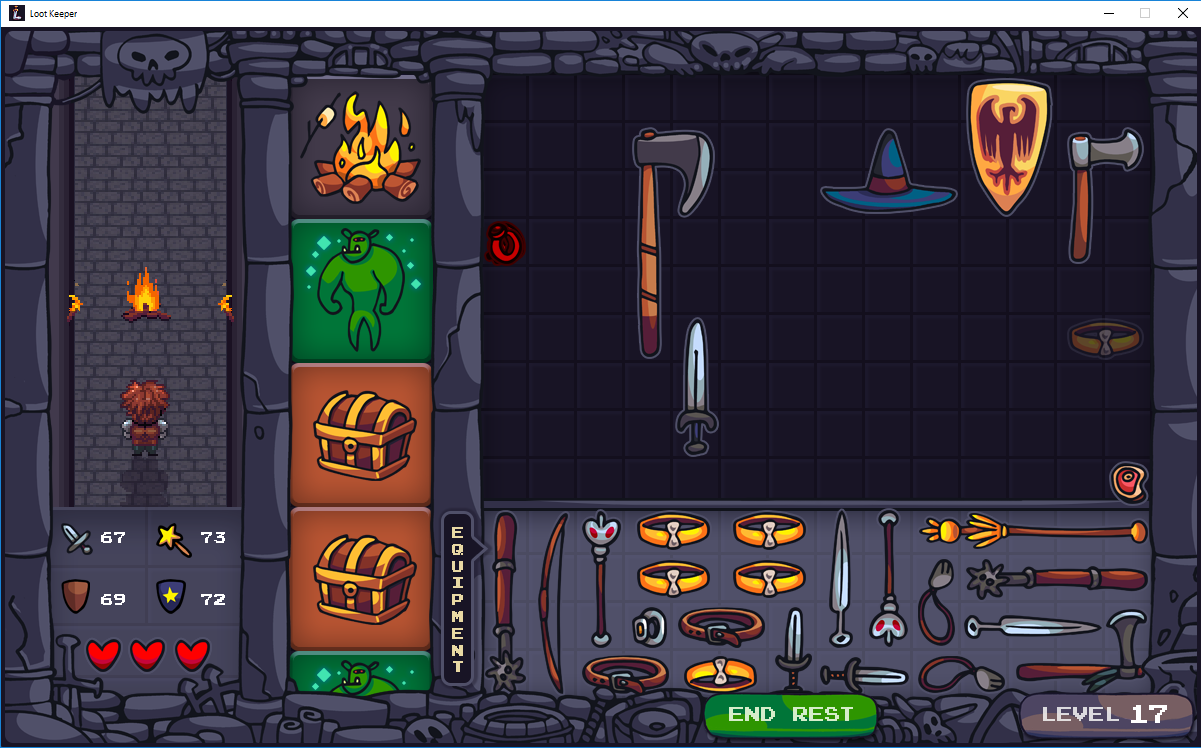 Thank you for that very detailed piece of feedback. That's a really good idea and the right direction to sort that issue out.  Yes, definetly item spawning needs to have better math behind it. We are planing to add  item rarity system too so we will need to think how to incorporate that. But your calculation will be a great start to work on this. Thanks again.

This game truly fits the "not enough room" theme for this LD. I think we're all guilty of hoarding items, especially in games like Skyrim and Fallout, and I think if inventorywas managed like this, we'd be a little better at choosing the best equipment. Love the fact you can see what's up next; it's a great way to determine whether or not moving items is essential that round.

You can check out my experience in the video below! (Loot keeper starts at ~4:20)

I absolutely loved your game and thought it was awesome. I am a writer for a small website that covers everything gaming. I am adding the game to an article that I am currently writing and will post the link to the article here when it had published. In the meantime here is a video of gameplay I did. I hope you all continue on your journey of making games.

This game was included in a compilation article that I wrote. If you would like to read my thoughts on the game, you can read the article by going here:

Hiya! I played your game on my channel! I really liked this game, it was a nice nad fun game to play!

Reply
Raithias4 years ago
I thought this was a great take on a timeless classic. I enjoyed how the inventory looked like Diablo. Really nothing bad I can say about this tons of fun!
Reply
zoopei white4 years ago(+1)(-3)

I haven't downloaded this game or read anything at all about it, I hardly even glanced at the first screenshot on the page. All I wanted to say was how genuinely perplexed, baffled, and disgusted I was by the fact that the L was a sword and not the T.

I just scrolled up to look at some of the screenshots, and realized what this game was really about, meaning that the bent sword was very intentional. However, I spend a good 15 seconds of my precious time writing the paragraph above, so I will still post this comment. Although, now, as I finish this paragraph, I realize how it would have been easier to not post the comment than to add an explanation paragraph afterwards that was twice as long.

Hey, played this on my channel! Maybe a bit tough, but really cool idea! :P

Hey ! i played you game for a couple of hours today. i have some feedback and even some ideas.

I loved the game, it looks awesome and really easy to get into.

great start, great tutorial.
The game itself got a bit grindy quickly. i had the original game from the installer. so i quickly found out that rings are OP.

There's no need to keep any loot, i kept two fridges in my inventory for 23 levels and my equipment was just rings.

the game crashed before i could screenshot it but i will do another run to show how i travel trough the levels.

so here are my ideas what i think would be nice:

-add a currency in the game. every time you fight an enemy, you get some coins.

-add a merchant where you can sell the loot you get. i see the pics up here and i just go.. why do they keep all that stuff, just destroy it. it's worthless.

-I would like an actual loadout for you character so for example a spot to equip one sword, one helmet, one pair of legs, 2 rings.. right now you can 'equip' a dozen helmets and have no sword. you could even make it so it changes the appearance of your character. (a bit how minecraft equipment works)

-the choice to be a girl because let's face it, girls are way cooler AND cuter.

-( not sure yet about this one but i'll leave it to you) possibility to find keys on enemies to open certain chests.

I couldn't play any longer, need some sleep.

This time, the first boyo rekt me even tho i had everything equiped you get at the start.

this run i had the idea you don't need physical damage output.

I like my inv clean. and i also love playing tetris.

Hey, thank you for your feedback, I love your ideas! Let me give you a quick glimpse of ideas we have currently:

- merchant event - big items are worth the most and the most expensive items you can buy are small ones!

- ring meta has to go :D We nerfed them a lot in the new version so if you want to use them, you have to juggle them around because of their polarized values (some are good for mages but make you weaker against warriors and the other way around)

- trap events - where you need to "hide" certain type of items either in your backpack or in your pockets, or else you will receive damage. Imagine a bear who attacks you if he feels any food on you!

- companions you need to carry in your inventory

And now I'm totally adding your ideas to the list, especially with boss fights - I imagine bosses that spawn stuff in your inventory but you have to be smart and use it against them!

We'll work on it further for sure :)

I enjoyed the game! I think the inventory mangement is well executed. The variety of different shapes and sizes for each item and the stats associated with each really makes you pick and choose what you need to keep and throw away. That being said, I do feel that the pacing of the game could use some more improvement, as it did feel like I was invincible after a certain point. It's nice that the stats for items are randomly generated, but, in my opinion, if there was a curve that increases the minium stats that you recieve for each item, while still randomly generating the stats for them, in balance with the enemies getting progressively tougher, it would overall help the pacing of the game progress a lot better. That being said, I still had a great time playing the game! I made a video with my experiences. Keep up the great work!

Thank you so much for playing and recording our game! The way progression works right now is enemies get more and more difficult with every camp, while your items stay the same - so at some point, there's no way to beat them, the only question is how long will that last :) We tried to make it happen faster with the last patch while also not making it impossible for players who got bad rolls on items at first. In full version, we'll make sure to balance it better!

Are there plans for Linux/Web builds?

Unfortunately we made this game in GameMaker Studio 2 and we don't have licenses for Web (it's very pricey), plus the only build for Linux we can do is Ubuntu, which makes it quite limited :(

Great game. I think this game would be even more great on smartphones.

Hello! I loved the game, but I cant find a link to the LD page to give a rating! You can add a link to it by editing the game page, there should be a field just for that.

Great game! Lots of fun to play. Only critique is that after a while you can become invincible and the in-game enemies lose their (quite literal) magic.

This was great! Gave a review on LD, and will mention it here, but the movement speed on the selected item was a bit fast. Other than that, everything was great!